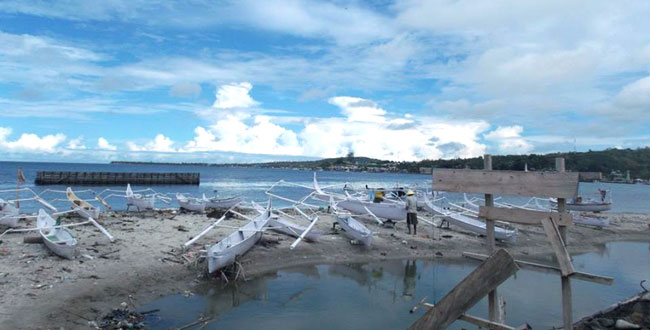 Beaches and mountains always become two tourists’ favorite places to visit during a holiday. Thanks to Polewali Mandar Regency. Everyone can find various beautiful beaches there, including Lapeo Beach. As the name suggests, it is located in Lapeo Village and belongs to Campalagian Sub-District. That means it shares the same region to Gonda Mangrove Park, which is also a famous tourist site. Not only it becomes famous due to the strategic location, the beach also offers a distinct beauty and a new sensation of vacation. It is because they can watch local’s activity when exploring the beach.

The Nuance
As mentioned before, it is easy to find Lapeo Beach. One of the reasons is due to the presence of a signboard on the roadside. Another reason is that it is located near to other tourist sites, especially GMP. What about the nuance? Well, the beach doesn’t look special after all. One thing that makes it unique is the presence of embankments where the locals work there daily. In the east part of the beach, tourists can see Laliko Village. Also, Kenje Village can be seen in the right part of it.

Exploring Lapeo Beach
There is another name, which is Bondeq Masing and it has the meaning of the salty sand. It is true that this beach doesn’t look special when it comes to appearance. However, no one may overlook its unique feature which is the embankments. People who live near to the beach work on those ponds in order to cultivate milkfishes, after all. For tourists, such activity becomes a unique attraction so they can take pictures of it during the visit. It even becomes an opportunity to learn the cultivation process.

The next allure of Lapeo Beach is the presence of a colony of birds playing around near to the embankments. These include Tammeroqdoq and Cappuroqdoq (the local names of those birds). Not to mention tourists may see several mangroves on this beach, which also become a nice background for photography. Make sure to capture perfect moments, especially when the birds gather on the mangroves. For those who love selfies, they can approach fishermen and take some pictures with them!

What is more? Tourists can do common beach activities in Lapeo including football, swimming, and beach walking. Those who come by motorcycle are allowed to explore such brown sandy beach with such vehicle, as well. As for swimming, kids should avoid the sea as the waves are not suitable for them. Thus, parents should supervise the kids better here.

How to Get There
The distance between Polewali Mandar Regency and Lapeo Beach is 31.7 km. That means the trip may take about 46 minutes to get to this site, but it can be faster by taking Poros Majene – Mamuju Street. First, tourists need to take a local transportation service to Campalagian Sub-District. The last thing to do is to get to Lapeo Village where the beach resides. The signboard may show the exact location, so don’t worry.