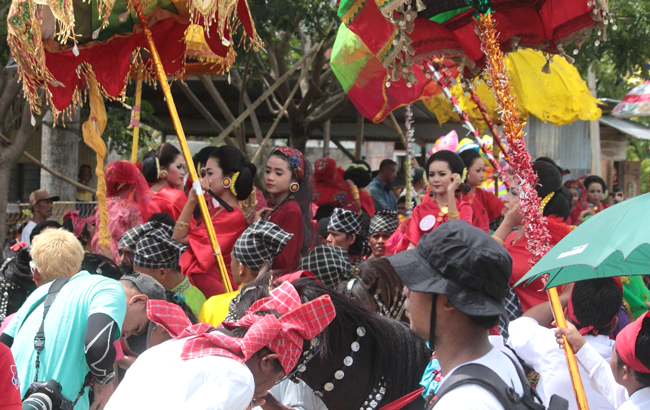 Polewali Mandar Regency becomes increasingly popular these days, especially due to the presence of Tonyaman Islands. However, people have other reasons for visiting the region! These include the interest in local culture and tradition. Not only Polman becomes the home of Mandar Tribe, but it also offers various interesting traditions that tourists can enjoy during the visit. In fact, it may require much time to enjoy all these traditions as there are many of them. Plus, tourists need the help of a local guide who can explain thoroughly regarding the history and more information on those customs.

Mandar Tribe
Here is the fact in Indonesia. Mandar Tribe or Mandarese People dominate the population of West Sulawesi Province, especially in Polewali Mandar Regency. In terms of the name, it derives from “Sipamandar” (to strengthen). It is said there were about 14 kingdoms who share the same region back then. Through an agreement, these kingdoms try to build a stronger bond over time and live harmoniously. Some tourists are interested in Mandar Tribe’s characteristics which are friendly and helpful. Not to mention they have an attractive appearance, especially the local women.

Enjoying Unique Tradition of Polewali Mandar Regency
Now it is the time to talk about any available traditions of Polewali Mandar Regency. There are many famous ones indeed, including Sayyang Pattu’du. It has the meaning of “the dancing horses”, which is the form of gratitude due to the success of local kids in finishing the whole Holy Quran. As the name suggests, villagers may conduct a convoy while riding a horse and accompanied by traditional music instruments. That means this tradition has a close connection to Islamic culture, as well. Moreover, tourists are allowed to watch the event freely and take some pictures during the convoy.

The next popular tradition is called Kalindaqdaq, which is the form of words delivery to someone. The purpose is to impress others with such beautiful words. No wonder, the locals often use it in order to flatter women and someone they like. What is next? Mandar Tribe also has a unique tradition called Perahu Sandeq, which represents the locals’ capability in voyaging. In this case, tourists can take pictures of Mandar’s boats and learn some history about their voyaging.

The next interesting tradition is called Parrawana or Rebana. At the special occasion, villagers may gather and play tambourines (rebana) together. Rebana has a close connection to Islamic culture, in fact. Not only tourists are allowed to watch the performance, but they can also learn how to play it! What they need to do is to talk to the locals and ask them regarding the tutorial.

How to Get There
A trip to Polewali Mandar Regency may take about 4 hours if tourists come from Mamuju City. It is because the distance is 202.9, which is considered a long trip. Have no worries. It would be both fun and comfortable if they use the best local transportation service and take the right route to get to the site.