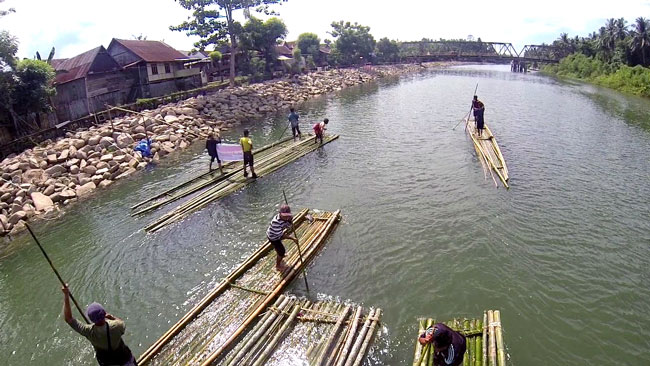 For those who live in Polewali Mandar Regency and nearby regions, Mander River Festival is indeed familiar to them. Despite the fact, these days, outsiders start discussing it and want to watch the event with their own eyes! This explains why tour agents start making a new tour program to their clients related to this event. What everyone needs to consider is to find the exact time and location to watch it. As the name suggests, the location is none other than Mandar River of Tinambung Sub-District. It is an annual event, so tourists should consult to their tour agent first regarding the schedule before heading to the site.

The Nuance
The event takes places in Mandar River and the participants are the locals and those who live in nearby sub-districts. Some outsiders and foreigners are seen there, as well, though. It is because the event has become an annual agenda and becomes more popular among tourists recently. Usually, the local government may choose three villages as the base of the festival. In terms of duration, it takes about 3-4 days! Not to mention some bamboo rafts are seen on the river, used by the locals to parade. As for tourists, they can only watch this from the riverside. Have no worries. It is allowed to take pictures of the event to their heart’s content.

Exploring Mandar River Festival
As for the locals, Mandar River Festival has become an annual event so they won’t miss the chance to witness it. The main purpose of the event is to retain the tradition as well as to build a stronger bond between the locals. The fact is that Mandar River is one of the tourism icons of Polewali Mandar, so everyone should conserve it well. Another benefit is that the festival attracts more tourists to come to Polman, especially to Tinambung Sub-District.

Not only Mandar River Festival becomes an entertainment for tourists, but it also gives them an opportunity to learn about local culture. Even the committees always think to give improvements to the event every year! This explains why the festival involves numerous activities like arts performance, workshop, river parade, river camping, tree planting, and many others. The best thing is that tourists are allowed to enjoy all these as long as they get locals’ consent first.

Mandar River Festival also helps those who live in the riverside to pay attention to the importance of Mandar River. That means they should be more aware of the environment and avoid littering at all cost. It is quite amazing that the festival gives many benefits to both locals and tourists, no?

How to Get There
From Polewali Mandar Regency, tourists’ main destination is definitely Mandar River in Tinambung Sub-District. This trip may take around 56 minutes, as the distance is 44.7 km. It can even be faster if they take Poros Majene – Mamuju Street. Once again, make sure to come only after knowing the exact schedule when the event is held by the locals.