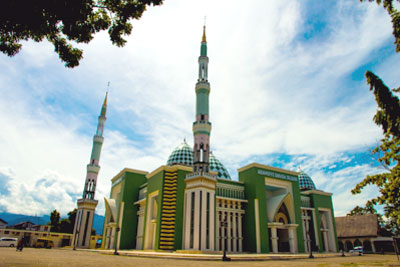 One of the main allures of a region is definitely the presence of a grand mosque. Even Polewali Mandar Regency has one called Syuhada Grand Mosque! It is located in Darma Village and belongs to Polewali Sub-District. That means it only takes about several minutes to get there from the downtown! Aside from the strategic location, this mosque is known for its majestic appearance and nuance for sure. Tourists are interested in visiting this building in order to enjoy several activities like photography and resting. Some of them also want to learn some history of it, in fact.

The Nuance
In terms of size, Syuhada Grand Mosque is considered big as it can accommodate more than 1000 people. Outside, it looks calm due to the combination of green and white color. Several towers are seen and the mosque features a dome in the midst of the roof. According to the locals, this structure was built on an area of 2025 meters per square! Not to mention it has nice facilities and management. The fact is that 41 people work here including security or guards. Do not forget the presence of a large parking area, so visitors can park their vehicle comfortable there.

Exploring Syuhada Grand Mosque
The most common reason why tourists are interested in visiting Syuhada Grand Mosque is to learn its history. They can ask the information either from “Takmir” (keepers) or local guides, actually. It is said the mosque was built in 1975 by Abdullah Majid (who was a regent back then). The fact is that the construction took much time and this building was inaugurated in 1985. During the inauguration, the regent was S. Mengga.

In 2007, the local government decided to renovate the mosque due to some cracks of the main structure. This reconstruction took about 6 years to complete! The next common reason to visit the mosque is to enjoy photography. Both the design and size of the building look so majestic, after all. No wonder, people can make good photos from it. It is also suitable as a background for selfies! One thing, it is recommended to take pictures on the outside of the mosque only. What about the inside? They may disturb worshippers, so it is not recommended.

Another reason why travelers often drop by in Syuhada Grand Mosque is to rest for a while before continuing their trip. For Moslem, the mosque indeed becomes a place for worshipping during the trip. As long as they don’t disturb others, they can freely enjoy the nuance of the mosque regardless of from where they come.

How to Get There
From Polewali Mandar Regency, tourists only need to spend about 5 minutes to get to Syuhada Grand Mosque. It is because the distance is only 2.4 km! What they need to do is to head to Darma Village and get to Yamin Street (where the mosque resides). Make sure to take RA Kartini Street for a faster trip, though.